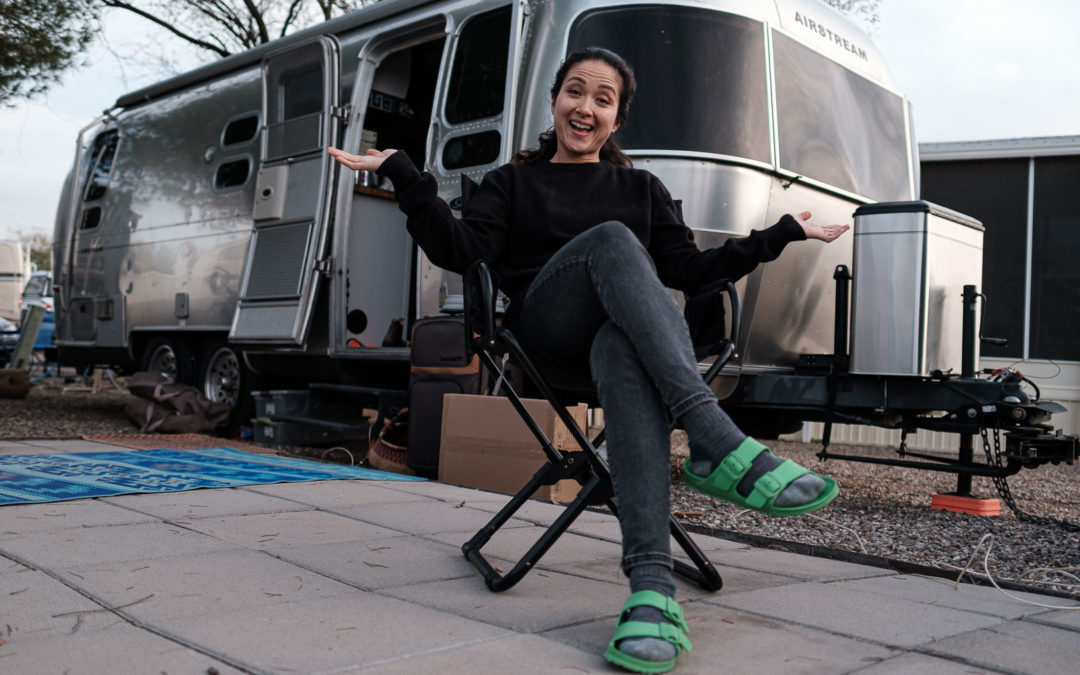 We don’t normally do unboxing videos, but we got some chairs and they came in a box, so we figured we’d unbox them on camera. These are the Expander Chair from Front Runner. They’re much smaller and easier to stow away than our old chairs. Hoping they help us save space when we pack them up, while still being pretty comfortable!

Get them from Front Runner Outfitters (they’re cheaper!): https://www.frontrunneroutfitters.com/en/us/front-runner-expander-chair.html

Get them from Amazon: https://amzn.to/36pPubA

Our folding table that fits perfectly with these chairs: https://amzn.to/2GrkPjC

The outdoor rug from the video: https://amzn.to/36t0tAX

Amazon links are affiliate links, following one and purchasing an item helps support us and does not affect the cost of the item. Thank you for making a purchase via these links if you do!

← Renovating an Airstream while traveling full time: Part 2 Packing Up to Go Boondocking or Anywhere Really → 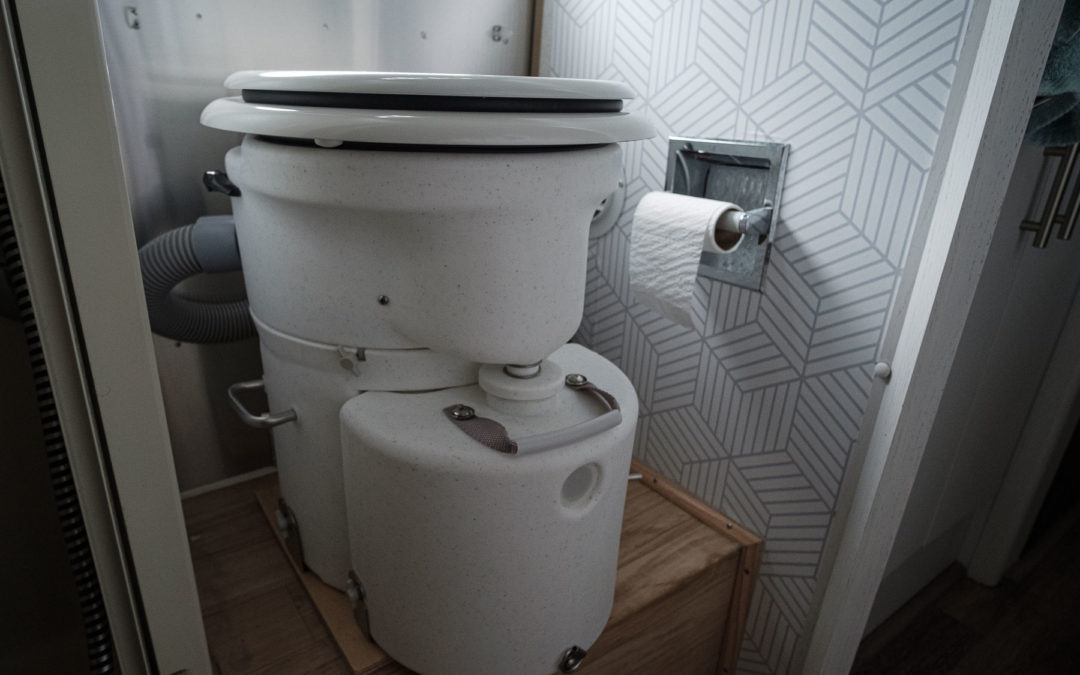 Installing an Airhead composting toilet in our Airstream

The idea of not having a toilet magically sweep your poo poo and pee pee away into the mysterious void that is the public sewer system was a foreign concept to us for a long time. Years ago, we’d look at potential cabins to stay in on Airbnb. Look at those windows! It’s close to the bike trails! Oooh, look, a hot tub!! Wait, it’s got a COMPOSTING TOILET!!!??? Yuck! I don’t want to poop into a 5 gallon bucket and smell it all weekend. No thanks! Next listing!

When we started full-timing, we heard of people getting rid of their RV toilet in exchange for a composting toilet. What is wrong with these folks? How does letting your poop sit around in a bucket make RV life better? How do they live with all those odors wafting around their rig? These are the kind of questions we had. We didn’t dig too deep into them, because we were certain a composting toilet was NOT for us! 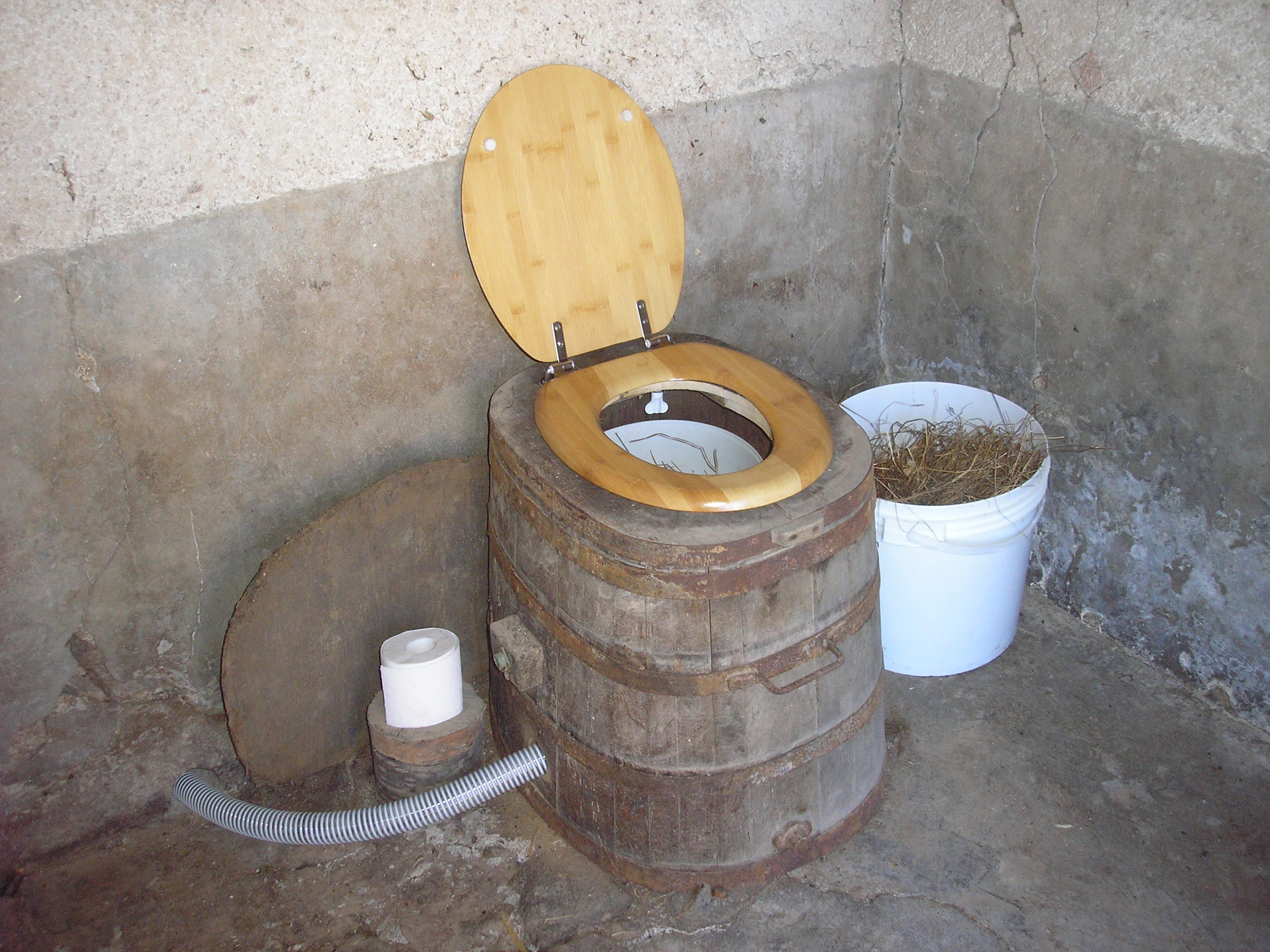 It wasn’t until we were on the road a while that we ran into a couple with a composting toilet. And they wouldn’t stop talking about it! Like it was the best upgrade they made to their RV, something that had truly changed their lives. We were all for the conversation of course, we love bathroom humor.

We continued to meet other couples who absolutely loved their composting toilets, as we made friends on the road. There had to be something more to this. We were truly intriged. We would pepper them with questions on how these things worked and listen intently to their answers. We would go into their bathrooms at stare at the odd shaped plastic commodes…at a distance of course. We would wonder what it would be like to not have a smell in our bathroom, or not have to dump that blackwater every week or so.

Fast forward a few months, our traditional RV toilet needed a new seal, we were looking at ways to boondock longer, and we would have access to some more tools since we’d be moochdocking at our friends’ house in Victor, Idaho. This would be the perfect time to swap out our toilet!

How these composting toilets work:
Modern composting toilets are not just a bucket you defecate into and sprinkle sawdust to cover it. They have been designed to separate the liquids and the solids. It’s not until #1 and #2 gets combined that things get really nasty. Urine is directed to the front of the unit and is collected in a detachable bottle that gets emptied every few days. The brown stuff gets deposited through a trap door in the bowl into a chamber filled with coco coir. You rotate a handle on the side of the unit and chops the logs and mixes them with the coco coir. There is a fan that draws air from the solids to help dry out and break down the mixture. The solids tank is supposed to last for a month with 2 people using it full time. You can read more about it here on Airhead’s site. 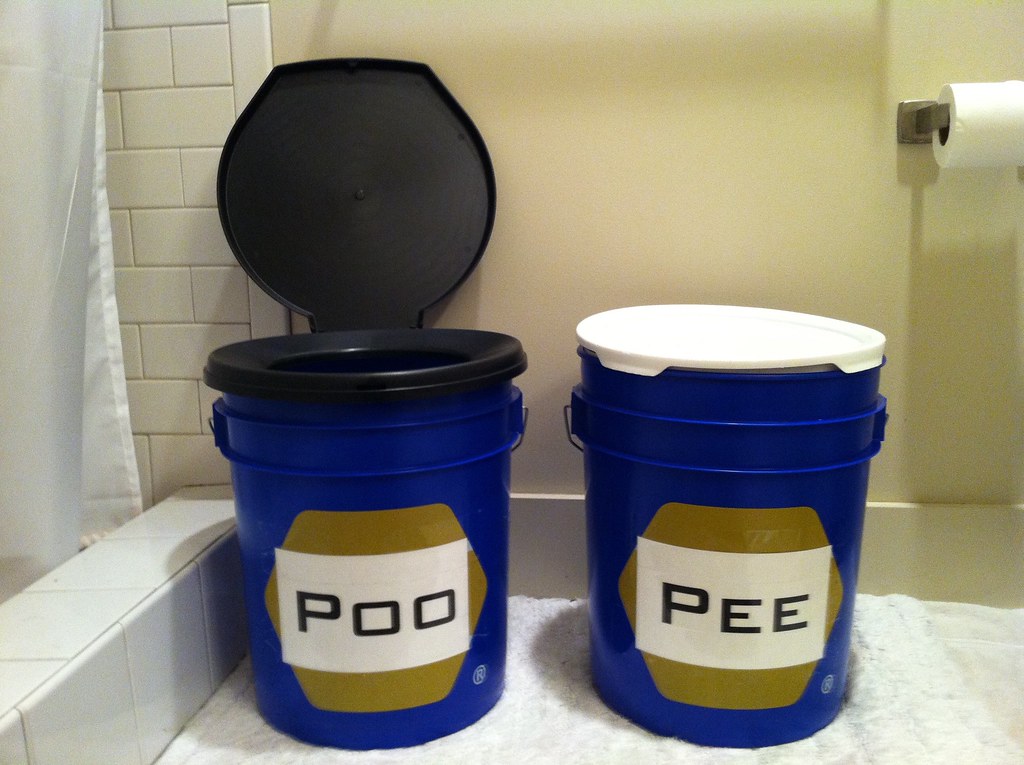 What we hope to gain:
It would be nice to save on some water when boondocking. Our toilet was supposed to use a pint of water when flushing, but that is an ideal scenario “quick flush”. We all know it literally “doesn’t go down like this”.

No black tank smell. Even though we use Bio Paks, we can still develop a wretched stank in our bathroom, especially in hot weather. We’ve been told the smell isn’t bad with a composting toilet, nothing more that a hint of “rich fertile soil”…time will tell.

We only need to deal with the grey water when we head to the dump station, no need to blast out poop residue on our hose after dumping.

Stay in one spot for a longer time. Maybe even indefinitely if we purchase some land in the future. Dealing with the disposal of greywater far from a dump station is way easier than getting rid of black water. You don’t have to run things through a mastication pump in order to chew up the nastiness. Our Airstream was parked in our driveway for 3 years before we hit the road. We would sleep in it when we’d Airbnb our house, or have friends stay in it, BUT we wouldn’t dare use the toilet! If we had a composting toilet installed at this point, we could have been utilizing the trailer even more. 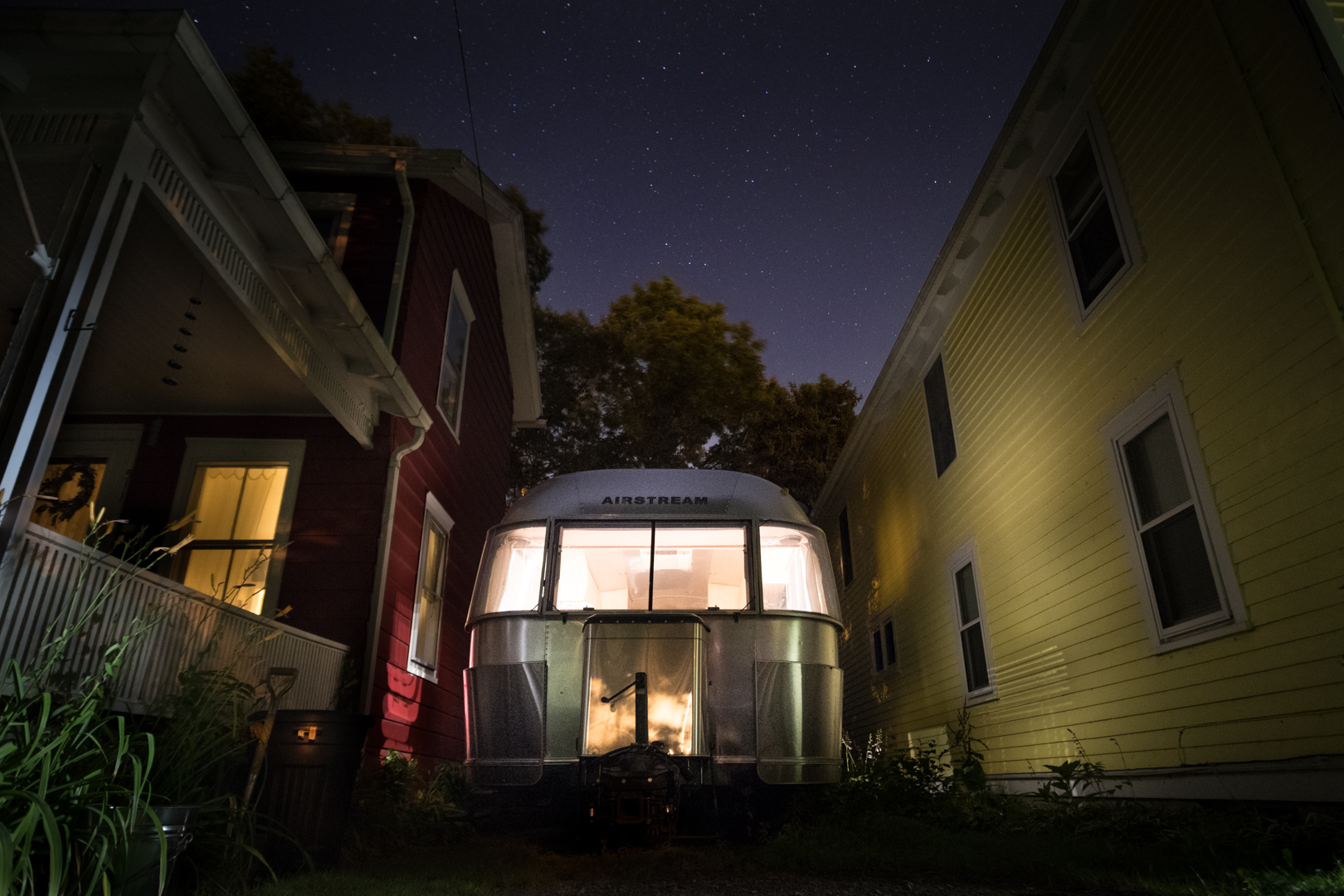 Why Airhead?
There are a number of popular composting toilet makers out there. We considered Nature’s Head and C-head before we settled on Airhead. All of these manufacturers seem to get great reviews, have good customer support, and use “head” in their product name. They all have similar features, but a few things stood out for us with Airhead.

First off, the Airhead uses a regular shaped toilet seat. Our rumps are familiar with the curve of such a seat, and prefer it when we make our “deposits”. This seat also has rubber gaskets to keep any odors that might creep up down below.

You can empty the liquids jugs without opening the solids container. This is something that needs to happen every few days, so not having to stare into the brown depths each time is a welcome relief.

The fit and finish of Airhead is great. The plastic is nicely molded and the hardware is top notch. The build quality should hold up to years of abuse on the road. It even looks a lot like a regular toilet, if that counts for anything.

Installing the composting toilet in an Airstream:
Installing one of these is pretty simple on the surface. You take out the old toilet. Plug the hole. Add some new brackets to hold it down. Run wire for a fan. Vent that fan. Nice and simple.

This becomes much more difficult when you try to install a composting toilet in an Airstream you’re currently living in. There were no easily accessible wires to tap into, so we had to fish some wires in from another location.

It was not possible to run a vent downward due to the black tank, and we’d have to remove some walls in order to run the fan vent to the roof (unless we just wanted a hose dangling from the ceiling in the bathroom). We ended up running the fan into the black tank vent, which was really close by. This required building a custom fan housing, since the one included was bulky and would have to be reduced to 1.5″ in a very short distance.

The last bit of fabrication involved building a little platform so the composting toilet could sit flush above the black tank toilet mount. Check out our video to see some more details on the installation.

While we had the toilet out and bathroom apart, Jess updated the wallpaper to something more modern. This really made the tiny space feel like it fit in with the rest of our Airstream.

Once the composting toilet was installed and the fan was running, we soaked the coco coir in water for a few hours. The coco brick swelled up after absorbing it and then we broke it up and added it to the solids tank. This gave us some exciting stuff to churn around.

See the pics below for install shots:

Why not remove the black tank completely?? Not having one could save some weight, or make room for another fresh or grey tank, we could eliminate the toilet pedestal to make the bathroom feel roomier, and not having the black tank sewer lines would give us a bunch more ground clearance. All great things! So we definitely considered this, and still might do it in the future.

We were a little concerned that we might not like the composting toilet, so having the black tank in place would let us retreat to a normal RV toilet. Also, not having a black tank might hurt resale if we ever decide to sell the Airstream in the future. And removing it would require us to rebuild the floor in the bathroom, not an easy task considering we don’t have many power tools on the road.

We traded our old toilet to someone on Facebook Marketplace for some IPAs, so we’re committed to using the Airhead toilet from here on out. We’re excited to see if it improves our lives in the way it did to our boondocking friends. Stay tuned for an update on this thing in the next month or two!

What kind of questions do you have regarding our decision to go with a composting toilet?

Here are some of the things we used for our install!

This is to plug up the black tank – https://amzn.to/2YlTfiZ

These links are affiliate links, following one and purchasing an item helps support us and does not affect the cost of the item. Thank you for making a purchase via these links if you do. 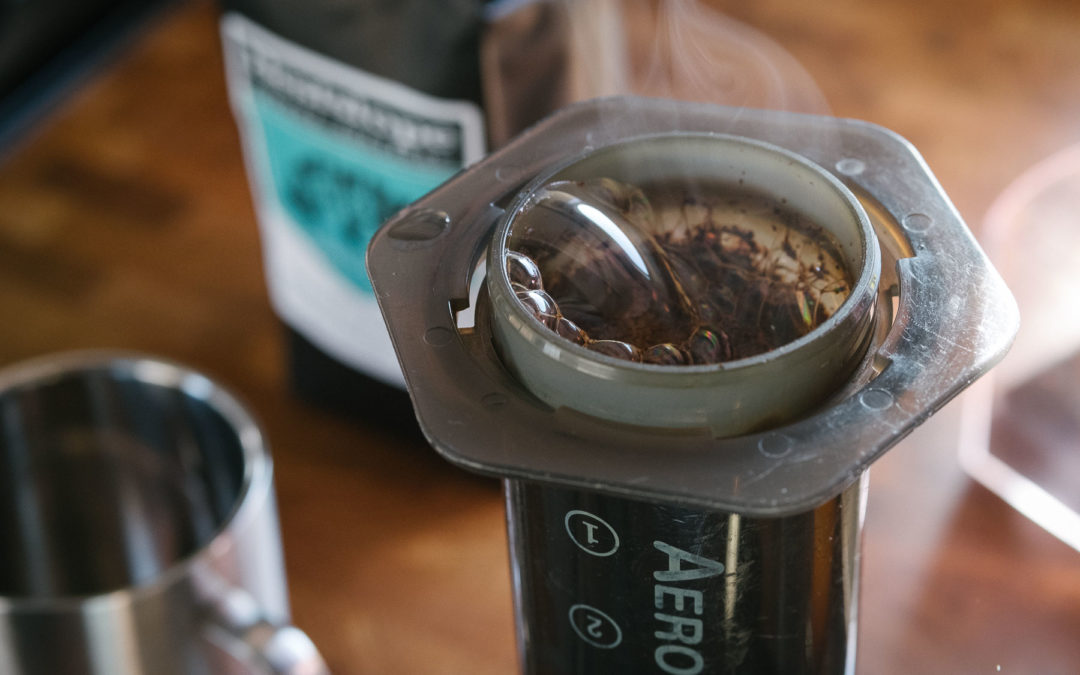 We have to be pretty selective nowadays when it comes to items we bring into our life… you know, because only have 200sq feet to work with! We decided to put together a short video highlighting 5 of our FAVORITE household items we use every single day! Things that make our life easier on the road and are also very practical to have. In fact, we owned a few of these items even before hitting the road!

We provide links to the items we talk about below.

Please note that these are our Amazon Affiliate links. There is no additional cost, whatsoever, to you, but it does help us earn a tiny bit of revenue if you choose to purchase any of these items! So thank you!

2. Aeropress Coffee Maker (owned prior to life on the road): https://amzn.to/2TwsyCh

3. Black + Decker Handheld Vacuum (owned prior to life on the road): https://amzn.to/2PKEFgP

What household items do you use on a daily basis that help make your life better?! Tell us in the comments below!